From January 5-8 apolar vortex brought the coldest weather in two decades to the eastern half of the country. Electricity peak demands across multiple markets rose to record levels, boosting power prices in Texas, New York, New England, and the Mid-Atlantic. The charts below show that high correlation between local natural gas spot prices and electricity prices. This is a typical result where NG is the marginal fuel (meaning it is the fuel used to run the plants that set the spot market electricity price at a given time). 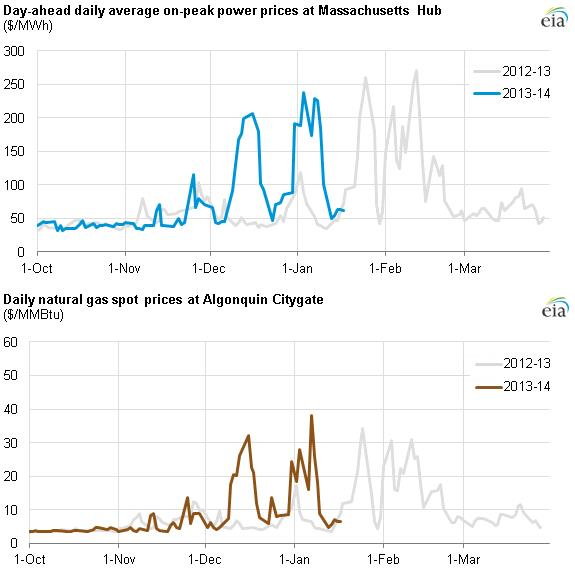 The charts also show that below normal temperatures in December 2013 and January 2014 have boosted natural gas and electricity demand above last year’s level. With sustained sub-zero temperatures through the end of the January 2014, Day-ahead prices are actually trending higher for the remainder of the month compared now compared to the January 7-8 cold spell (see chart below):

While natural gas supply has increased because of fracking, transportation and storage have become big issues. It is evident from the second increase in natural gas spot prices during January 2014, that market players have real concerns about pipeline constraints that limit the distribution of heating fuel to densely populated consuming regions. These concerns led to much higher Day-Ahead prices for January 23, 2014. BGE’s average Day-Ahead price for January 23, 2014 was $731/MWh. We are seeing the market respond to weather. Recent price action has reminded market players of the effect of price volatility as a function of bitter cold conditions. Natural gas basis prices had remained relatively flat, except for New England; however this winter Northeast spot basis has traded up to 30 times above NYMEX Henry Hub cash prices (see table below).

The Midwest and Northeast have set natural gas demand records. Most pipelines this January have curtailed interruptible or secondary firm transportation and storage services. This week, multiple pipelines have been constrained and a system wide operational flow order on Transco’s system was issued. An operational flow order notice requires shippers to balance their gas supply with their customers' usage on a daily basis within a specified tolerance band. Shippers may deliver additional supply or limit their supply in order to match customers’ usage. If the supply is not balanced, shippers may incur noncompliance charges.

With sustained below normal temperatures through the end of January, natural gas and electricity price volatility will be extremely high. The cash month rally has leaked into the futures market; however, most of the gains have been isolated to the February and March 2014 contracts. The March/April 2014 spread has increased from ($0.05) in September 2013 to ($0.59) on January 24, 2014. The next two withdrawals from storage will most likely increase the deficit against the 5-year average, so natural gas supplies are expected to tighten. Unusually low inventories by the end of the winter season could boost futures prices beyond March 2014. Contact your risk management advisor to discuss determine if you are adequately protected against current market conditions.