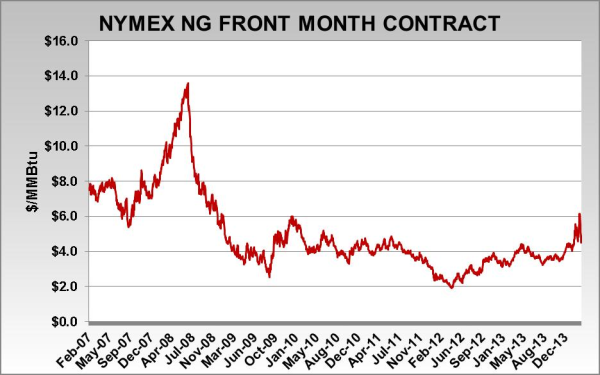 During this winter season, natural gas price volatility has been extreme as temperatures have fallen to unprecedented levels due to the breakdown of the polar vortex. Low temperature records were broken across the U.S., natural gas heating-related demand has risen and natural gas inventories have been depleted at a faster rate when compared to historical benchmarks.  Nevertheless, natural gas has not been the most volatile commodity in recent years according to the U.S. Global Investors Periodic table of Commodities Returns. In the last 10 years, the most and the least volatile commodity returns have been registered in Nickel and Gold respectively. Crude Oil has been a top three performer in four of the last 10 years, while natural gas has only been in this category two out of the last 10 years.

On January 2, 2014, the NYMEX Henry Hub NG February-2014 (front month) contract settled at $4.321/MMBtu, and on January 29, 2014, the contract expired at $5.557/MMBtu (see chart below). This was the highest expiration settlement price for the front month in four years. During the month of January, the front month contract rose $1.24/MMBtu, or 28.6%. The chart below shows that on expiration day (1/29/14) the front month price posted a $0.52/MMBtu or 10% gain for the day. The March 2014 contract followed suit and rallied almost 11%, settling at $5.465/MMBtu. During the expiration day, weather forecasts turned colder than previously expected, so market players that underestimated demand rushed to the market and were clobbered in a short squeeze.