According to the National Oceanic and Atmospheric Association (NOAA), summer 2013 will be above average in West Texas and in the Mid-Atlantic states.  The outlook both in terms of temperatures (left hand side) and projected rainfall (right hand side) is summarized in the following set of four maps, with the top maps being the outlook for June and the bottom ones the outlook for the entire summer (June-August).

Given NOAA’s forecast, which is consistent with other outlooks for summer 2013, the question becomes what impact the weather will have on energy prices, especially where temperatures are forecast to be above normal.

Effective June 1st, the cap on the spot market price in the Electric Reliability Council of Texas (ERCOT) increased to $5,000/MWh, or $5.00/kWh.  Needless to say, these high costs could have significant impact on end users, who have exposure to Real-Time prices.  Higher than expected above normal temperatures would lead to even higher‐than-expected peak demands, as rotating outages could become necessary to maintain the integrity of the system as a whole. Below we present a summer outlook summary: 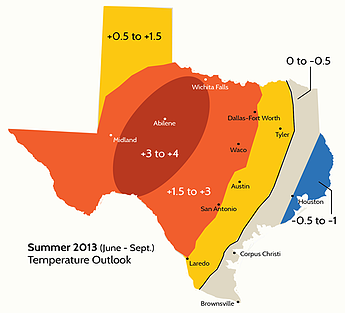 The other region of the country expected to suffer from above normal temperatures this summer includes most of Pennsylvania Jersey Maryland (PJM) Interconnection’s footprint.  In a statement released earlier this year, PJM indicated more than adequate capacity reserves, with over 185,000MW of installed capacity to cover a projected peak load of just over 155,000MW.  In addition to actual steel in the ground, PJM has almost 12,000MW of demand response that can be used to ensure grid reliability.

The benefits of such significant demand response penetration are two-fold:

1)      Increase grid reliability—since the stability of the grid is impacted by both available supply and actual demand, being able to reduce demand provides the system operator, in this case PJM, another tool to maintain grid integrity rather than having to rely on just the supply side of the equation; and

2)      Dampening of power prices during times of peak demand—to meet peak demand, PJM has the option to reduce demand instead of turning on higher priced generators which will increase energy prices

Besides above normal temperatures across most of the country, several government and private weather service outfits (e.g. NOAA , Colorado State University, and Accuweather) are calling for a more active than normal hurricane season.  As working natural gas in inventories continues to be below the 5-year average (currently -3.9%, or 88Bcf below), natural gas prices will be very sensitive to natural gas cooling related demand, since greater demand from natural gas fired generators could slow injections ahead of next winter.

Regarding electricity prices, in early June, the July-2013 and August-2013 ERCOT on-peak bid/ask spreads increased considerably due to expectations of warmer temperatures in Texas. Industrial and Commercial customer who have waited on hedging exposure to summer electricity index prices will have to pay a premium for on-peak prices as fear and lack of liquidity have contributed to an increase in summer on-peak heat rates.   Prudent risk management policies will dictate mitigating future summer price risk exposure now rather than waiting.

With summer fully upon us and the expectation for above normal temperatures across two of the most important electric grids in the U.S., there is a significant risk of higher energy costs this summer.  The increase in the price cap serves only to exacerbate this problem in the ERCOT market, while the abundance of demand response capacity in the PJM market is likely to result in more stable power prices.  In thinking about energy risk management challenges, the summer, and this summer in particular with above average temperatures predicted along with a more active than normal hurricane season, highlights the need to be thinking about future energy needs now rather than being in a reactive mode. Contact your energy advisor to find out if you are exposed to adverse price movements during the summer and to develop a strategy to manage your energy risk.