Depressed gas and electricity markets present one of the best buying environments in many years, even for terms as far out as 2020.  This is particularly noteworthy considering the much higher price levels and prevailing market anxiety as we emerged from the Polar Vortex a year earlier.

In March 2014, natural gas (NG) inventories fell to 822 Bcf after a brutally cold winter that boosted heating demand well above normal levels. The sharp decline in inventories kept natural gas and electricity prices higher through most of 2014. However, record natural gas production, especially from shale plays including Marcellus have slowly replenished storage. Currently natural gas production is between 5 -7 Bcf higher compared to last year, so supply could outweigh demand throughout 2015.

Despite some spikes, NG futures have trended down since February 2014. In November 2014, prices rose on expectations that the second half of the 2014-2015 winter might resemble the previous winter’s Polar Vortex, but December and January had mild weather and the down trend resumed. Prices jumped briefly in February and March 2015 as record low temperatures engulfed the eastern half of the country, but the sell-off again resumed. During these spikes, spot prices in the Midwest and the Northeast , which skyrocketed above $100 in some areas a year earlier, remained in check this year due to robust natural gas production, LNG supply in New England and lower crude oil prices. 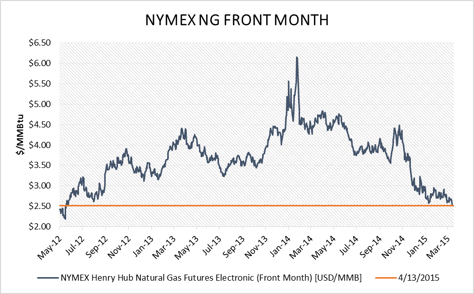 Weak spot prices have translated into lower futures prices. Since 2008, long term futures have trended down (see chart below). Although, NG futures are in contango (near month prices are cheaper compared to those months that expire further into the future), the forward premium has compressed.

In ERCOT, fixed prices have decreased appreciably, as heat rates have remained relatively flat. Power markets in PJM, NY, New England, MISO and to a lesser degree in CA are mixed, because material increases in forward heat rates have at least partially offset the drop in NG prices. In PJM, prices have had very high volatility, with forward prices either flat or slightly backwardated ( outer months are priced lower than near term months), and a relatively high premium remains in forward heat rates. Prices in NY and MISO are more attractive, even in longer dated periods compared to the same time a year ago. New England prices remain very high, so locking a long term price would not be recommended.

Could the trend reverse?

A couple of factors should eventually offset current oversupply conditions:

Throughout the country, gas and electric prices have declined due to weak market fundamentals. Electricity prices have fallen most in markets where gas is the marginal fuel that sets the clearing price of electricity. As spot prices have fallen, long term natural gas futures have also decreased considerably, and forward premiums are currently smaller. Even if your gas or electricity supply contract expires in 2016 or 2017, there could be considerable savings, compared to your current rates, for periods beyond these expiration dates. Flat forward curves may justify locking in a long term contract and several retail providers are now offering attractive prices through 2020. Contact your Acclaim Energy representative (713-524-0250 or visit our website, www.acclaimenergy.com) to discuss how you can take advantage of the low price environment.