CALIFORNIA DROUGHT AND ELECTRICITY FORWARD PRICES – HOW WILL IT AFFECT SUMMER 2015 PRICES?

Drought Conditions: The latest U.S. Drought Monitor report, which was released on 5/21/2015 showed that following drought conditions by category :

The chart below shows that Severe Drought (D2) conditions escalated significantly during the last two years, and since the summer of 2013 most of the state of California has been under such D2 condition. Extreme Drought conditions have improved modestly compared to the same week in 2014, but Exceptional Drought (the most intense drought category) conditions have almost doubled since last year at this time. 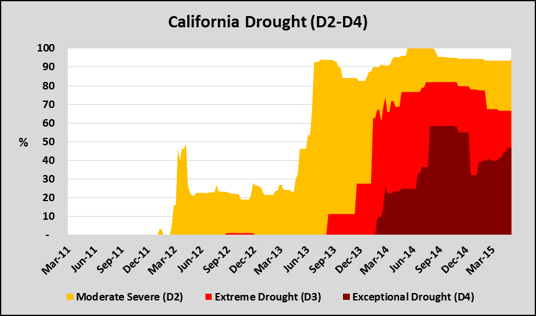 Thirty years ago, total hydroelectric generation accounted for 22% of California's electricity supply. In 2014, it accounted for approximately 7%. During the same period, in-state natural gas generation increased from 27% to 42%, a jump of over 55%. Besides an increase in natural gas fired generation, renewable generation has also increased significantly (mostly wind and solar). In 2015, it is expected that renewable power will mitigate the reductions of in-state hydroelectricity generation. While the annual average contribution from hydroelectric power to total electricity generation in California decreased from 23% in 2011 to 7% in 2014, wind doubled its generation contribution from 4% to 8% and utility-scale solar generation grew from less than 1% to 5% over the same period.

Moreover, On May 7, 2015 the California ISO (CAISO) released its summer 2015 assessment, which forecasted that operating reserve margins under one-in-two-year normal conditions to be 25.3% system wide, 25.0% for the SP-26 region and 26.4% for the NP-26 region. According to CAISO, electricity supplies will be sufficient to meet even extreme scenarios because of additional generation, stable imports and moderate peak demand growth. CAISO’s assessment can be summarized as follows:

Electricity prices in California have been very well correlated with natural gas futures even as heat rates have been trending higher since 2013. Despite an increase in heat rates, fixed prices have trended lower as natural gas has more than offset the increase in heat rates. The recent rally in natural gas prices affected the 2016 and 2017 calendar year strips the most, while the back years have not changed much. Natural gas rallies typically provide good opportunities to buy the cheaper heat rates and then lock in natural gas prices when conditions are more favorable. The historical forward chart below show that even after a recent rebound, California fixed prices are still very attractive compared to previous levels. 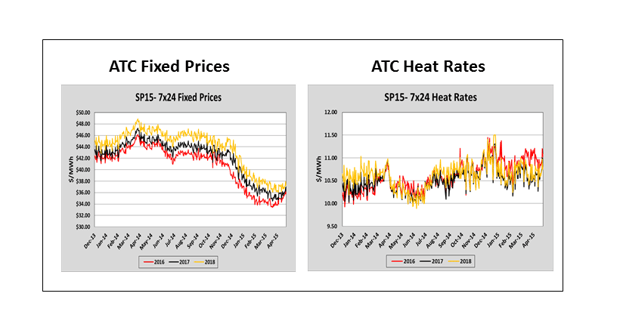 Will the development of El Niño provide drought relief?

We have been hearing about El Niño Southern Oscillation (ENSO) since 2013, when several researchers started predicting that ENSO was coming. On May 14, 2015, the U.S. Climate Prediction Center (CPC) and the International Research Institute for Climate and Society, published an ENSO Advisory. In summary, CPC’s report states that there is approximately 90% chance that ENSO will continue through summer 2015 across the Northern Hemisphere, and a greater than 80% chance it will last through the balance of 2015. ENSO refers to a warming of Eastern Pacific Ocean sea surface temperatures that occurs naturally every few years and depending on its strength can have major consequences on global weather.

Opinions vary drastically on how much ENSO will strengthen and affect the U.S in 2015. This phenomena always manifests itself in different manners as so many variables affect the final outcome; however, in the United States, ENSO’s effect is typically greater during the winter months when the northern part of the country usually gets warmer and the south tends to have higher than normal precipitation. Therefore, with ENSO’s May arrival, California might not see any drought relief during this coming summer.

CPC’s May 21, 2015 U.S drought Seasonal Outlook is actually calling for current conditions should persist or intensify from May 21 – August 31, 2015. If conditions in the Pacific continue as it is expected, ENSO could offer some relief to California during the 2015-2016 winter. 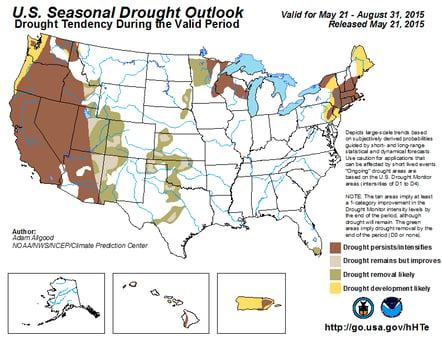 Even in the midst of an epic drought that has significantly reduced the availability of hydroelectric power, the California ISO expects healthy reserve margins during summer 2015. Consequently, California forward electricity prices are trading at historical low levels. On-Peak peak summer risk premiums are relatively low, and this is further confirmed by the fact that California’s 2015 3rd quarter prices are lower compared to most other markets across the country for the same period. Now would be a good time to take advantage of these depressed price levels. Market fundamentals and technical analysis are providing good buying signals.

Contact your Acclaim Energy representative (713-524-0250 or visit our website, www.acclaimenergy.com to discuss how to benefit from the current low price environment in California.