IS NATURAL GAS PRODUCTION SLOWING DOWN – COULD PRICES BE AFFECTED?

Natural gas production from shale began approximately 15 years ago, when it became a large scale commercial reality in North Texas. As more companies became aware of the commercial success and gained confidence in their ability to profit from hydraulic fracturing, shale production spread to other shale formations across the country. The chart below shows the significant increase in U.S. dry shale gas production through March 2015. Gas from shale now comprises nearly 50% of total U.S. production (Source: EIA) 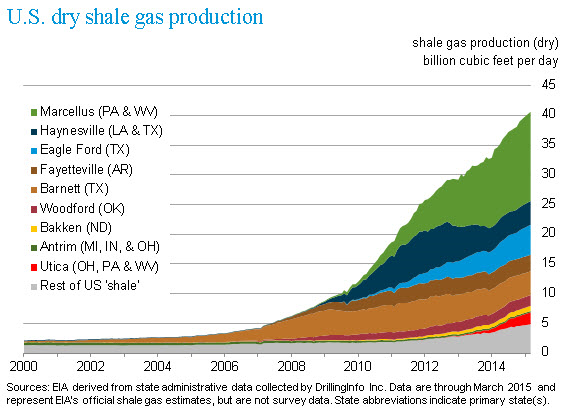 Signs of Supply Slowing Down?

Low prices take care of low prices. Not only has demand from the power sector increased, but we currently see indications that oil and gas production may be flattening out. The latest Drilling Productivity Report from the U.S. Energy Information Administration (EIA) published on April 13 projects gas production to drop by 23 MMcf/d or 0.05% during May 2015. Some of the decline is attributed to delays in pipeline connections; however, the perception that production could be reaching an inflection point may provide sustained support to prices.

According to Baker Hughes, the number of rigs drilling for natural gas and crude has fallen since last year’s peak by 31% and 51% respectively, as most producers have announced plans to reduce capital expenditures.  Despite the drop in the number of drilling rigs, it is not expected that production will decrease materially. In the next couple of months there could actually be a small increase in new well production because of the backlog of wells that have been drilled but have not been completed and because of higher drilling efficiency. Therefore natural gas production should remain at least 4 Bcf/d higher through the balance of 2015 as compared to corresponding periods in 2014.

Effect on Prices in the Near-Term

Currently supply continues to outpace demand, and without any significant supply disruption or spike in demand, injections into storage should remain above the 5-year average, so the inventory deficit should further narrow. The EIA’s latest Short Term Energy Outlook published on April 7, 2015 projects that end-of-October 2015 inventories will total 3,781 Bcf, or 17 Bcf less than the 5-year average.

With low to moderate demand through May 2015, strong production and injections above the 5-year average, the upside risk in prices should be limited. Since March the prompt traded NYMEX gas contract has encountered strong resistance at $2.68/MMBtu and strong support at the $2.50/MMbtu, as prices have failed to breach such support with conviction. We expect prices to consolidate in the $2.50 - $2.75 range, with increased probabilities of testing and reaching the lower levels.

Key price drivers to monitor during the spring and summer of 2015 are:

The low natural gas price environment is providing very attractive near and long term electricity price opportunities. Electricity prices have fallen most in markets where natural gas is the marginal fuel that sets the clearing price of electricity. Even if your gas or electricity supply contract expires in 2016 or 2017, there could be considerable savings, compared to your current rates.

Contact your Acclaim Energy representative (713)-524-0250 or visit our website, www.acclaimenergy.com to discuss how to benefit from the current low commodity price environment.