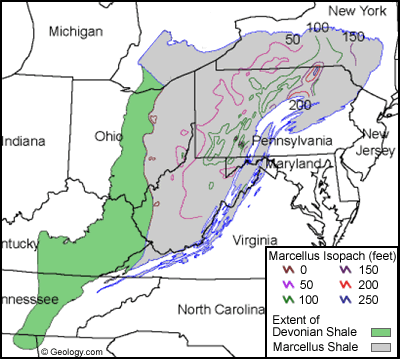 As evident from the map above, the Marcellus area lies just to the West of most population centers, including New York City, Washington, D.C., and Philadelphia, just to name a few major cities.

The Marcellus contains both wet and dry natural gas deposits.  Wet gas is a term used for wells that find natural gas mixed with other liquids, including oil and other petroleum liquids which can be used for industrial processes.  By contrast, dry gas does not contain these other liquids.  With gas prices depressed in relative terms, the value of dry gas has decreased, leading to a drop in the number of wells being drilled and put in production for gas alone.  Wet gas wells, however, are still being drilled and put in production because of the added value of the liquids reclaimed as part of the process, especially with oil hovering near the century mark.

The impact of Marcellus Shale on Energy Risk Management

For end users of energy, especially along the East Coast, the Marcellus Shale development has been a boon in terms of driving energy prices down.  In some of the states within the organized wholesale power markets serving these areas—the Pennsylvania-New Jersey-Maryland (PJM) Interconnection, the New York Independent System Operator (NYISO), and the Independent System Operator of New England (ISO New England)—natural gas fired generation units are dispatched as the “marginal” units.  As a result of this, natural gas fired power plants tend to set the overall price for wholesale energy in these markets.  In other words, as natural gas prices fall, wholesale power prices follow a similar trend.  This translates into lower overall energy costs for end users and in some ways, simpler energy procurement decisions.

While lower wholesale power prices may appear to make energy risk management a simple exercise, this is not necessarily the case.  Lower prices simply mean that there may be savings available to end users.  When should prices be locked and for how far out on the forward curve?  Low or falling price environments tend to exhibit varying degrees of rising premiums and a positive slope in the forward curve.  Markets that trend down or ‘sideways’ create lower price opportunities for months that today are higher and further out on the curve.  For some end users, waiting or actively managing energy risks often produces better results than fixing the price for all forward months at once.  But risks are highest in the front of the curve, and sudden shocks to the market can severely harm exposed positions if they are too close.  The fiscal budgeting process and assistance by experienced professionals can provide clear guideposts to optimize these opportunities while mitigating the risks.  A good risk management program will document the steps to take, monitor performance, and ensure ease of understanding for everyone including the CFO.

The explosion of natural gas production in the Marcellus Shale has literally revolutionized the energy landscape, both present and future, in the United States.  Significant production of natural gas, oil, and other hydrocarbons from previously unattainable deposits has altered market conditions, driving down power prices, created new jobs and increased revenue for local businesses along the East Coast.  While the depressed natural gas prices have led to a drop in the number of dry gas wells that are no longer as profitable, supply remains stable and prices have been trending down.  While this creates opportunities for end users to lower their energy procurement costs, it creates different challenges for energy management consultants who need to communicate clearly to their clients the risk/reward calculus behind any recommended strategy.