While the United States Supreme Court is deciding the fate of CSAPR, (for more information on CSAPR and the Supreme Court, click here) other EPA rules, such as MATS, are having a noticeable impact on energy markets.  For instance, FirstEnergy Corporation has announced plans to close both its Hatsfield Ferry and Mitchell Power Station, coal fired plants where FirstEnergy has determined that it is not cost effective to retrofit these facilities to comply with the requirements of the new EPA rules.  Combined, these 2 plants account for 2,000 MW of generating capacity, meaning that they can collectively supply almost 2 million homes.

While these plants are scheduled to close on 10/9/13, the Pennsylvania, New Jersey, Maryland (PJM) Interconnection has asked FirstEnergy to delay closing these facilities over concerns that the closures could potentially compromise energy reliability in the PJM territory.  While PJM is examining enhancements to the transmission system to insure energy reliability if these plants close, such infrastructure fixes will take time.

If FirstEnergy moves forward with the proposed closings, PJM could offer to keep the plants on-line under what is known as a “Reliability Must Run” (RMR) contract.  These are contracts between PJM and a power plant operator to keep a plant on line at above market costs in order to maintain the integrity of the transmission and distribution system.

The closing of coal plants due to EPA regulations creates several challenges:

With the continued improvements in fracking techniques, 2013 can best be described as a year of plentiful natural gas supply.  Despite a marked decline in the number of natural gas rigs, production has remained at or near record levels, indicating that there is sufficient natural gas to meet demand at the present time. 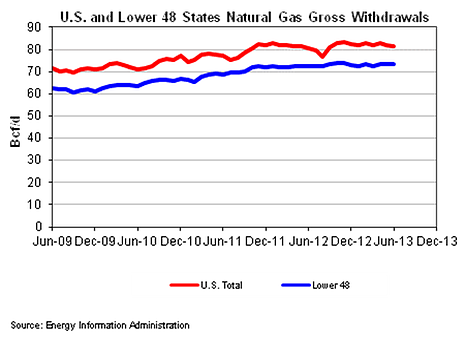 After a very cold spring, natural gas futures rallied to $4.50/MMBtu as heating demand depleted natural gas inventories at a higher than normal rate; however a mild summer drove cooling demand down. Therefore, prices followed a bearish channel up to early August 2013.   Since then, market prices have rebounded after a late summer wave of high temperatures in the consuming regions increased the power sector consumption (power burn) of natural gas in the Midwest, Northeast and Texas.  The chart below displays daily 2014 calendar year strip prices since 1/1/2013. The chart shows how weather has been a major driver in price changes. 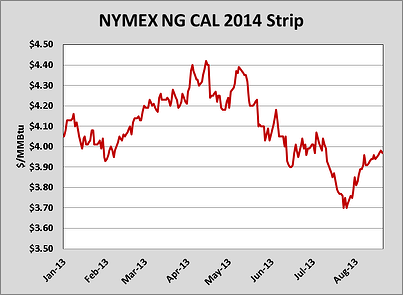 Price action for the remainder of 2013 is expected to be choppy as the market gauges how much demand for natural gas will affect the performance of injections into storage ahead of the winter season (NOV13-MAR14). Currently the Energy Information Administration is projecting that working gas in underground storage will end at 3,800Bcf by the end of the injection season (10/31/2013). Lingering warm temperatures through the first half of September will boost near-term demand, but as summer winds down, the call on natural gas demand will be much lower compared to a heat wave during the peak of the summer season. Therefore the following factors will have an effect on natural gas prices through the end of the year:

Despite very low tropical activity, so far this season, traders are still monitoring closely activity in the tropics. Approximately ~50% of the total tropical energy has historically occurred in SEPT, and ~70% occurred between SEPT-NOV. In short there can be a rebound in activity, so we still have a long way to go before we get through the peak of the hurricane season.

We are starting to see seen some preliminary 2013-2014 winter forecasts, which are calling for below normal temperatures in the Midwest and Northeast (see Fig. 2.0). However, the Farmer’s Almanac is calling for below normal temperatures across two thirds of the continental U.S. with significant snowfalls for parts of every zone (see Fig. 2.1 below) 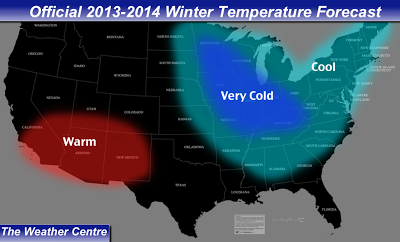 There are too many variables to accurately forecast winter conditions with so much anticipation; however, we do expect to see:

The two trends described above show that an energy professional has to proactively monitor potential fundamental market changes as a result of regulatory policies. Likewise, understanding market price drivers is a key to develop and execute risk management strategies.