While 9/3/2013 was certainly warm, it was by no stretch the hottest day of the summer. However, it did set a new price record in the ERCOT Real Time Market, raising the question as to why?  There were two key reasons that caused the prices spiked:

2.            High demand—temperatures around the state were well in to the 90s, creating high
demand and forcing ERCOT to look to higher priced power plants to meet demand. Despite the Real Time price spike, power reserves remained above 3,000 MW so no advisory or emergency steps were triggered. Likewise, ERCOT did not call for conservation.

Graphical view of the event

The following graphs show the 15 minute average Real Time market clearing prices in $/MWh of all load zones in the ERCOT region for September 3, 2013.  The charts also show that there
were a couple of triple digit prints prior to the forced outages; however the big move started at 4:15pm. 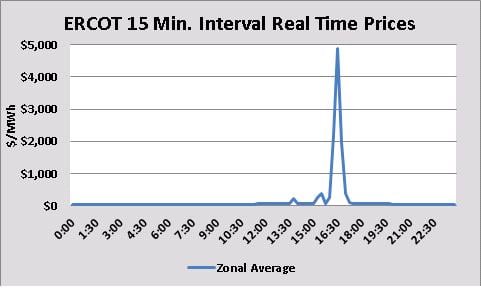 The following graph depicts the average Real Time prices from 3:00pm through 6:00 pm. A closer look at this interval range shows that Real Time prices returned to normal levels as fast as they reached the peak. This means that the shortage of operating reserves was alleviated within one hour as power balance in the interconnection system was restored. Not only does ERCOT maintain the following ancillary services: Regulation Service Down (REGDN),
Regulation Service up (REGUP) and Responsive Reserve-Services (RRS) to keep frequency within predetermined limits, but also to restore the ERCOT System within the first few minutes of an event that causes a significant deviation from the standard frequency. 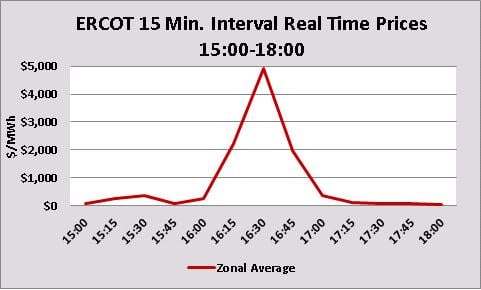 Who will be affected by the price spike?

The table below shows hourly charges as a function of different hourly usage (in kWh) quantities settling against the Real Time price spike of hour ending 1700.

Excluding hour ending 1700, the average Real Time price of all other 9/3/13 hours was approximately $44.00/MWh. For comparison purposes if and end user had consumed 1000kWh and the hourly price had been $44.00/MWh, the hourly charge would have been $44.00. The difference between $2,317 and $44.00 is massive. Historically, Real time prices have settled lower compared to forward prices; however the example above shows that and end user who want to be on a Real Time price product should have the risk tolerance to bear the high price volatility.

Conversely, customers who have  contracted a Fixed Price Load Following product, should not feel any impact to Real Time price spikes if their usage is within their contract Tolerance Band. Under this product structure suppliers includea swing premium in their price to wear the Real Time price risk.

The 9/3/13 event highlights the potential for extreme volatility and high prices in the Real Time power market in the event of a supply shortage.  Even a few hours of high energy prices can eliminate any savings which could be realized as a result of being on an index based product.  The examples above are meant to show how adverse prices in the Real Time market can
affect end users depending on the product structure under contract. Contact your energy advisor to determine what the best product structure for your business is, to develop a risk management strategy that will take in account the variability of index prices and how to take appropriate steps to mitigate this risk.