On January 6, 2014, demand for electricity reached 55,486MW during hour ending at 8:00 a.m. Besides very high demand, approximately 13,000MW were unavailable between midnight and 8:00 a.m. Included in that number were 3,700MW of forced outages caused by weather. After the unexpected drop of generation, available capacity was negative; meaning ERCOT had to use reserves to meet demand. Additionally, ERCOT had to import 800MW of power from the eastern U.S. electric grid and 180MW from Mexico. As this was happening, ERCOT ordered an Energy Emergency Event (EEA)- Level 1 alert at 6:52 a.m. and shortly thereafter ordered EEA- Level 2, which is one step away from ordering rotating outages. On Monday, ERCOT issued a Conservation Alert after the event that remained in effect through Tuesday January 7, 2014, at approximately 10:00 a.m. 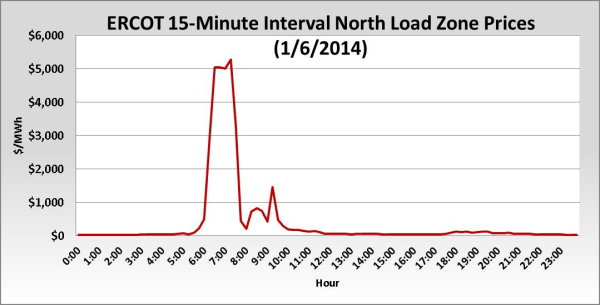 On January 7, 2014, despite record-breaking winter peak demand, there was sufficient generation available to serve expected demand and maintain operating reserves.

Will This Price Spike Affect You?

The answer is: It depends on the product structure that you contracted with your Retail Electric Supplier (REP).

Non-residential electricity end users who contracted a Real-Time Index product, will be affected the most since they are 100% exposed to RT prices. Customers can hedge within the term of their RT contract by restructuring with a Day-Ahead Index or fixing the price of their contract.

Customers on a Fixed Price or Heat Rate Block will only be affected on excess quantities consumed above the contracted block. Such excess quantities will settle at RT prices; however, the energy blocks hedge exposure to RT prices and mitigate the impact. End users who contracted a load following product have a very low probability of being affected due to the intra-month balancing protection offered by their monthly tolerance band. In other words, with a Load Following product, the REP wears the RT price balancing risk if the end user’s actual usage is within the tolerance band specified in the contract.

Some end users can take advantage of price spikes by shedding load during these events and liquidating unused hedge quantities in the market at higher than contract prices. This load response action has become more valuable as price caps continue to increase. Contact your Acclaim representative to find out if this strategy and/or Demand Response options are applicable and available to you. Acclaim’s energy sourcing programs evaluate a holistic approach to manage energy risk, product structuring and energy contract negotiation.