Arctic Blast Shuts Down 20% of PJM's Installed Capacity-Conservation, Demand Response and Power Imports Save the Day

On Tuesday January 7, 2014, record cold temperatures affected electricity generation infrastructure and boosted electricity demand across the PJM service territory. Demand hit a new record for winter peak use of 141,500MW at a time when nearly 20% of the generators in PJM's territory were down. On Wednesday morning, nearly 40,000MW of PJM’s 190,000MW installed capacity were offline.

Some of the generation losses were due to natural gas pipeline constraints, which caused record-breaking gas price spikes across much of the Midwest and Northeast. Even though the Mid-Atlantic region remains mostly fueled by coal and nuclear sources of electricity, development of natural gas fired generation has increased significantly in recent years in PJM. Therefore, natural gas power burn has to compete with other natural gas needs during cold spells since natural gas has become the predominant heating fuel in the U.S. In the Midwest and Northeast, outages were not only triggered by the lack of natural gas availability, steam-cycle fossil fuel-fired power plants (primarily coal) made up about half of the outages, with diesel generators making up the second largest portion. Some coal stacks were frozen or diesel generators could not function in such low temperatures. 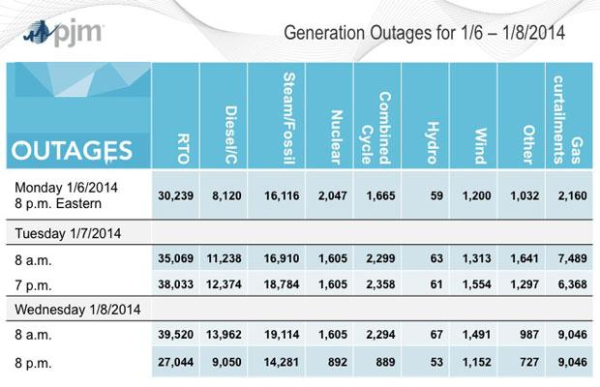 In addition to calling for conservation efforts from residential and small business customers to reduce power use, blackouts were avoided by calling on 1,900 MW of Demand Response (DR) programs, and by purchasing emergency power from neighboring regions. Despite the challenges, PJM was able to meet demand without interruption. Nevertheless, tight market conditions were reflected in Real-Time prices across all PJM trading hubs. PJM resorted to a 5% voltage reduction when reserves grew short at 8:00p.m. on January 6, 2014, triggering scarcity pricing. Prices averaged $732/MWh for most of the period from Monday evening through Tuesday evening, peaking at more than $1,800/MWh Tuesday morning and $1,100/MWh during the evening. The chart below shows Real-Time price action from January 6, 2013 through January 8, 2014 (source: PJM). 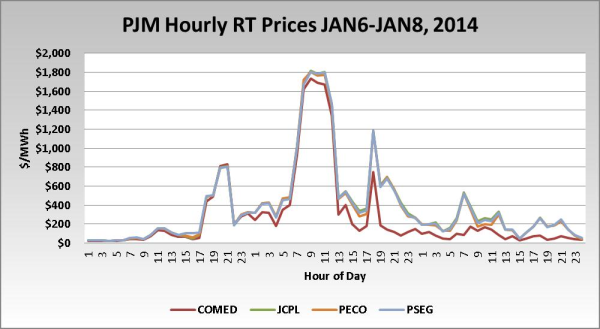 The dispatch of DR pushed prices from $1,000/MWh to $1,800/MWh; however, DR plays a critical role in providing operational flexibility to the grid as ISO’s can call on these resources to improve grid reliability and address grid needs quickly.

In PJM, the max energy price (absent congestion and losses) through May 2014 is $1,800/MWh. From June 2014 to May 2015 the max energy price will be $2,100/MWh, and beyond June 2015 it will increase to $2,700/MWh. These max energy prices are much lower compared to those from Electric Reliability Council of Texas (ERCOT), where the effective cap of $5,000MWh was hit on January 6, 2014 (read previous blog:  ERCOT Sets New Winter Peak Demand- Real Time Prices Hit $5,000/MWh Cap on January 6, 2014). In ERCOT, the cap will increase to $7,000/MWh in June 2014 and $9,000/MW in June 2015. Both of these ISO’s have different ways to solve for scarcity pricing since PJM has a capacity market component and ERCOT is an energy only market. Regardless, the impact on commercial or industrial electricity end users if exposed to Real-Time prices in any of these markets could be huge if not adequately protected. Contact your energy advisor find ways to mitigate exposure or protect against price spikes.