More Nuclear Power Plants to Refuel in 2014 Compared to 2013: How Could This Affect Natural Gas Prices?

Platts recently reported that the 58 U.S. nuclear power plants totaling almost 60,000MW are expected to refuel in 2014, compared to 54 units totaling over 55,000MW in 2013. The analysis is based on historical refueling data from the US Nuclear Regulatory Commission.

Refueling and maintenance outages for nuclear units typically take place in the spring (March –June) and fall (September – November) "shoulder" months when demand for electricity is normally lower. The chart below, which is the most recent outage chart that the Energy Information Administration published, shows the peak and troughs of the outage throughout the year. The chart also reflects nuclear capacity outages through September 2013, when outages were increasing with the start of the 2013 fall refueling season.

During a typical nuclear plant outage, approximately one-third of the fuel in the reactor is replaced. Outages usually include maintenance and routine inspections and usually this time is also used to replace equipment.

According to the Energy Information Administration’s Annual Energy Outlook 2014 (Early Release), natural gas electricity generation is projected to surpass coal generation as a percentage of total generation in the U.S. Generation from coal is expected to flatten as more coal-fired capacity is retired and fewer new coal plants are developed (see chart below). The relatively low cost of natural gas makes the dispatching of existing natural gas plants more competitive than coal plants and, in combination with relatively lower capital costs and lower emissions than coal generation, makes plants fueled by natural gas an alternative choice for new generation capacity. In the near-term though, coal will continue to be the largest component of electricity generation in the U.S. 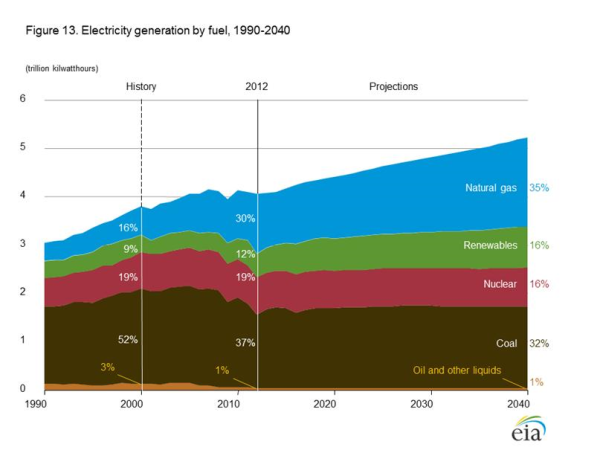 What impact will a higher number of nuclear outages have on natural gas and electricity prices in 2014?

Temperatures recorded so far this winter have been the coldest in some regions for more than two decades. Consequently, heating related demand for natural gas has risen significantly. With two more winter months remaining and near-term expectations of below normal temperatures in the consuming regions, concerns that supplies will be very tight by the end of the natural gas winter season are rising. Some analysts are calling for inventories to decline well below 1,500Bcf by the end of the winter heating season. Such outcome would set a 6-year low.

An increase in the number of nuclear outages in 2014 compared to those in 2013 could further tighten the natural gas market. Since mid-November of 2013 natural gas price action has been driven by the shift in weather forecasts and higher than normal withdrawals from inventory. Therefore, an unusually low inventory by the end of the winter heating season followed by a high April nuclear outage peak could set the stage for a higher natural gas price environment in 2014 since natural gas demand could remain high during the spring. Customers with open 2014 natural gas or electricity exposures should start developing a risk management strategy to protect against potential adverse price movements.

Below we have included a list from Platts’ repot, which lists the projected outages per semester of 2014 across all markets:

MARKET REGIONS, SECOND-HALF 2014
One unit in the ERCOT region

In the Midwest/Upper Midwest region, eight units totaling 6,955 MW are expected to refuel in the second half of 2014

In the Northeast/Mid-Atlantic region, five units totaling 5,002 MW are expected to refuel in the second half --