On January 2, 2014, the NYMEX Henry Hub NG February-2014 (front month) contract settled at $4.321/MMBtu, and on January 29, 2014, the contract expired at $5.557/MMBtu (see chart below). This was the highest expiration settlement price for the front month in four years. During the month of January, the front month contract rose $1.24/MMBtu, or 28.6%. The chart below shows that on expiration day (1/29/14) the front month price posted a $0.52/MMBtu or 10% gain for the day. The March 2014 contract followed suit and rallied almost 11%, settling at $5.465/MMBtu. During the expiration day, weather forecasts turned colder than previously expected, so market players that underestimated demand rushed to the market and were clobbered in a short squeeze.

The highest price volatility during the last couple of weeks has occurred on the two remaining winter months (February and March). With the recent February 2014 contract expiration precedent, it is likely that volatility will remain very high as market players gauge demand through the end of the winter. Price action for the March 2014 contract since January 29, 2014, has been very volatile as the difference between the high and the low prices has been $0.75/MMBtu during a two day span. After topping $5.46/MMBtu, the March contract pulled back to $4.72/MMBtu and is now consolidating between the $4.75-$5.00/MMBtu range. As near-term weather forecasts continue to shift, Mother Nature will continue to drive price direction through the end of the heating season.

Beyond March 2014, price volatility has been tapering off through the back-end of the forward curve. Prices for the balance of 2014 have not risen as dramatically as the February and March 2014 contracts have done thus far. For example, during the month of January 2014, the March contract rose 31% while the April contract only rose 7.5%. Consequently, the spread between both contracts increased materially since last year. On November 4, 2014, the spread was practically at $0.00/MMBtu, but is now trading at -$0.65/MMBtu. The winter/spring spread increase suggests that that the market believes that production will be able to respond between April and October to replenish the current inventory deficit. The chart below shows the MAR14/APR14 spread for the last 12-months. 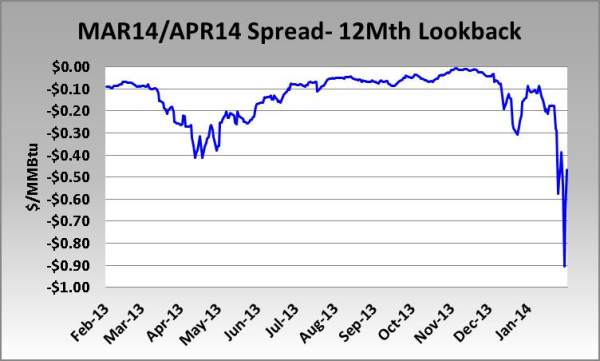 Natural gas production remains at record levels, thanks to new drilling technologies. On January 31, 2014 edition of the Monthly Natural Gas Gross Production Report the Energy Information Administration reported that natural gas production from the Lower 48 States increased by 1.5%, to 75.95Bcf/day in November 2013. Nevertheless, recent frigid temperatures have created well freeze-offs that have significantly affected natural gas production in the Marcellus and Utica shales. A greater amount of NG would need to be replenished during the injection season to meet next year’s heating season demand if it takes months for production to return to normal levels and if cold weather leaves stockpiles at an unusually low level by the end of March. Under this scenario, natural gas prices during the spring would continue the bullish trend.

Natural gas basis exposure has, again, become a major topic of conversation across the Commercial and Industrial natural gas end user community. Basis is the difference in value between gas at one delivery point and gas at another delivery point. The standard reference when calculating a basis differential is NYMEX Henry Hub (Source: Trading Natural Gas, Fletcher J. Strum).

The coldest winter in decades has exposed natural gas pipeline infrastructure inadequacies in the U.S.  The Mid-Atlantic and Northeast have been hit the hardest as prices in poorly supplied trading hubs rose above $100/MMBtu. The lack of pipeline capacity to take gas where it is needed has caused these spikes.

It seems that market players had forgotten how ruthless a winter can be and how it can affect prices as a function of supply and demand. After a couple of mild winters and two years of low natural gas prices, some natural gas end users became complacent and underestimated the risk associated with a black swan event. Investopedia defines a Black Swan event as an event or occurrence that deviates beyond what is normally expected of a situation and that would be extremely difficult to predict. Commercial and Industrial end users who have exposure to natural gas and basis should proactively develop a risk management strategy that defines rules and takes emotion out of the decision making process. This disciplined approach should require energy managers to define price thresholds to trigger hedging. Hedging transactions should be executed based upon strategy and upon statistically significant technical indicators. These rules will mitigate the risk against the adverse price movements that we are currently facing. Contact your Acclaim Energy representative to discuss how to better prepare and manage exposure to natural gas and electricity prices.