During this winter season, natural gas price volatility has been extreme as temperatures have fallen to unprecedented levels due to the breakdown of the polar vortex. Low temperature records were broken across the U.S., natural gas heating-related demand has risen and natural gas inventories have been depleted at a faster rate when compared to historical benchmarks.  Nevertheless, natural gas has not been the most volatile commodity in recent years according to the U.S. Global Investors Periodic table of Commodities Returns. In the last 10 years, the most and the least volatile commodity returns have been registered in Nickel and Gold respectively. Crude Oil has been a top three performer in four of the last 10 years, while natural gas has only been in this category two out of the last 10 years.

The table below shows that commodities tend to have wide price fluctuations and prices follow cyclical and seasonal trends. These trends shift as market fundamentals change. For example, natural gas  production levels are expected to remain strong after increasing  for a sixth consecutive year in 2013 as drilling technologies such as hydraulic fracturing “fracking” made it economical to extract fuel from shale rock. This explains why natural gas dropped to the worst performer end of the table from 2009-2011. 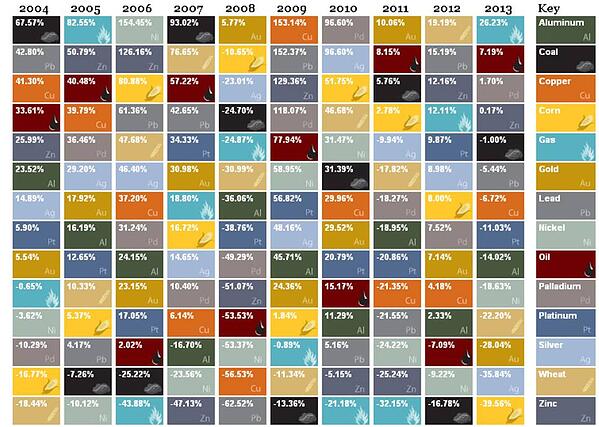 Natural gas returns improved considerably in 2012. The 2011-2012 winter season was recorded as the fourth warmest in U.S. history. Therefore, strong production and bulging natural gas inventories pressured prices to record lows (i.e. $1.907/MMBtu) in April-2012. At such level, it was more economical to run natural gas fired power plants causing a massive coal to natural gas switch through the balance of the year.  In more than 117 years of records, July 2012 stands alone as not only the hottest July on record in the lower 48 United States, but also the hottest of any month on record in that time span (source: NOAA). Therefore, demand for natural gas increased during the summer and through the end of the year, so prices gained 12.11% by the end of the 2012.

In 2013, there were several extreme weather events:

Colder than normal temperatures during the spring, late November and December boosted heating demand. Higher demand caused withdrawals from storage to be far in excess from the five-year average decline and the trend has continued in early 2014. Likewise, higher than normal nuclear outages provided price support late in the year. The chart below shows how prices rallied in the spring and the late fall to record a gain of 26.3% in 2013. 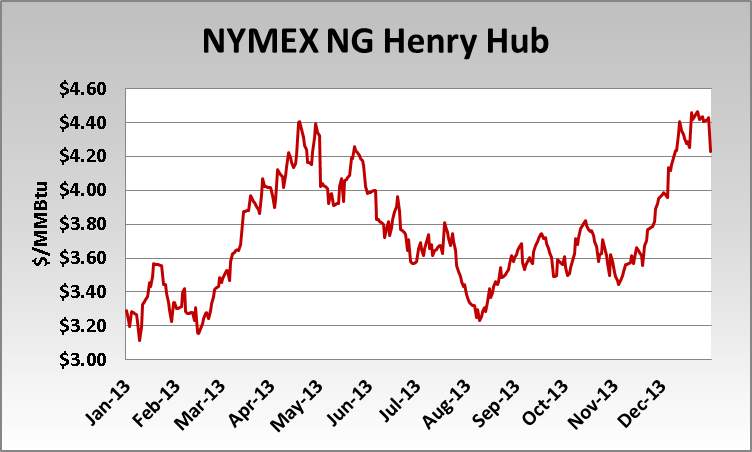 Through mid-February 2014, natural gas prices have gained approximately 22% as government data shows that already-tight storage supplies keep shrinking with six week of winter remaining. As of this writing, working gas in underground storage is 27.2% below the five-year average. These are the lowest inventory numbers in 10 years for the first week of February and conditions could worsen.

In short, Mother Nature will continue to drive price action through the end of the winter and possibly for the balance of the year. Currently, fundamental and technical indicators are bullish for the near-term. Will production be able to respond and replenish natural gas during the injection season? Contact your energy advisor to discuss how these conditions could affect you and how to manage your energy risk during times of turmoil.