The combination of scarcity pricing measures, demand response, energy efficiency, growth of DG, growth of renewable generation and Commercial and Industrial price response make it almost impossible to correlate economic indicators to electric demand. ERCOT’s old forecasting model used economic indicators, such as non-farm employment, to forecast future electric demand. Because of the decoupling between economic growth indicators and electric demand, ERCOT will now use growth rates in customer accounts or premises to project future growth trends in each region served by the ERCOT grid.

This is the first CDR report that has been developed using the new load forecast methodology.  Peak loads and total annual customer demand will now be forecasted based on an average of the past 12 years of weather conditions. Likewise, the new model also accounts for energy efficiency impacts on the historical summer peaks. The February 2014 CDR report projects that peak demand will grow uniformly at 1.3% per year for the next 10 years. The old model growth also averaged 1.3%; however, accelerated growth was modeled in the front years (as high as 3% in 2015) and growth well below 1.3% in the back years. 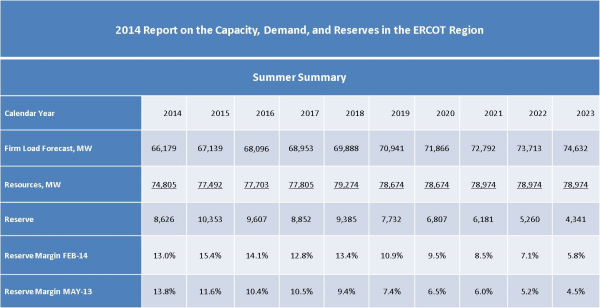 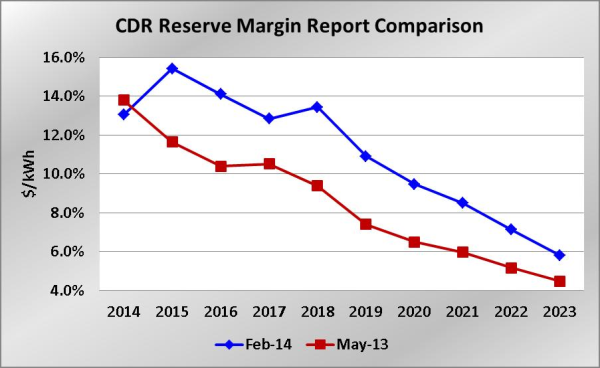 New generation is expected later this year, so the 2014 planning reserve margin is expected to increase from 13% percent at the start of the 2014 summer season to 16% when the following natural gas combined-cycle power plants come online:

The commercial operations date for the Deer Park plant is currently July 1, 2014, while the date for the Panda and Ferguson plants is currently August 1, 2014. Besides these additions, ERCOT is evaluating if the grid can rely on more power from commercial wind farms during peak demand than the 8.7% of installed capacity included in the current outlook.

Next on the agenda

The next Summer Seasonal Assessment of Resource Adequacy (SARA) report will be released on March 5, 2014. This report covers a range of scenarios including extremely high load and generation forced outages.

The PUCT had delayed its workshop on resource adequacy from January to March, and has now delayed it to mid-May, which would leave less time for the PUCT to make any reform ahead of the next legislative session in 2014.

Improvements to load forecasting methodology were necessary due of the following:

These changes have made trying to correlate economic indicators with load growth an impossible task.

The report comes at a time where significant market design plans are being scrutinized to improve reliability in ERCOT. The most contentious topic is whether Texas should shift its current “energy only” market design to an “energy & capacity” market, where power plants would get paid regardless if they generated electricity or not to maintain excess capacity.

The latest CDR report projects healthier planning reserve margins than previously expected. This impression could potentially delay the need to redesign the current market structure and table the capacity market discussion for now. It is possible, though, that regulators will continue to evaluate a future capacity market solution tailored to ERCOT.