Natural gas inventories have recovered significantly after reaching an 11-year record low of 822Bcf in late March-2014. During the last nine weeks, natural gas injections into storage have outperformed historical levels, and eight of them exceeded 100Bcf/week. Moreover, the last nine injections have exceeded the five-year average gains by 24Bcf on average. The drivers behind these above normal injections are the following:

The chart below shows the 2014 injections since April 4, 2014, and historical figures for the respective weeks.

Natural gas inventories totaled 2,022Bcf as of 7/4/14, which was 653 Bcf, or 24.4% lower than the same time last year and 769 Bcf, or 27.6% lower than the previous five-year (2009-2013) average. The 2014 injection season had a slow start in April but has picked up since then adding a total of 1.2 Tcf to storage. The EIA expects working gas stocks will reach around 3,430 Bcf at the end of October, 380 Bcf lower than last year at the same time. To reach 3,430 Bcf, weekly injections through the end of October would need to average 78 Bcf (including the injection for the week ending on 7/11/2014). The five-year weekly average for the remainder of the injection season is 59 Bcf. In light of extended weather forecasts through the end of July-2014, it seems achievable to inject 18 Bcf more on a weekly basis in 2014. To reach the five-year average of 3,848 Bcf, injections would need average 101 Bcf every week, or 42 Bcf higher the five-year average gain. Therefore, it is very unlikely that storage will end close to the five-year average. Nevertheless, producers should be able to bring supplies back to normal levels by next summer.

Consequently, fears that inventories would not be replenish started dissipating by mid-June, causing prices to start to tumble from the upper bound of the trading range ($4.90/MMBtu) where the natural gas front month has traded for most of 2014. On 7/7/14, prices breached the lower limit of the trading range and is currently testing $4.12/MMBtu support. As of 7/10/14, the front month has dropped 16% since 6/16/14 (see chart below). The next level of support is the psychologycal round number $4.00/MMBtu. Eventhough the front month is in oversold territory, fundamentals suggest that we might remain in a new $4.00-$4.33/MMBtu trading range in the near future. 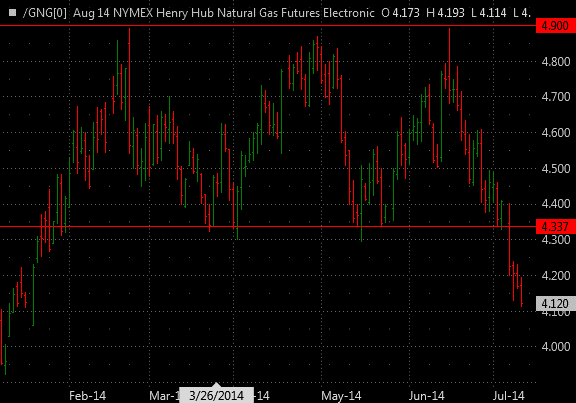 We expect to see high volatility during the second half of the injection season due to supply disruptions from tropical storms or hurricanes and shifts in weather. These facors could affect the pace of injections ahead of next winter. What is clear now, is that supply concerns ahead of the next heating season have eased considerably.

Contact your Acclaim Energy representative to discuss strategies to play this market and how current market conditions could affect you.

Keep up with the latest energy trends and download your whitepaper on electricity product stucturing.