During the fall, meteorologists sharpen their assumption to build their probability weighted winter weather forecast scenarios. From an energy perspective, this is also a critical time of the year. Since it is typically a period of low energy demand, there tend to be seasonal dips that provide good buying opportunities in natural and electricity. This year though, natural gas prices have been seesawing since mid-July 2014 due to the following reasons:

Shifts in weather forecasts have had a significant influence in natural gas futures and electricity prices. Even so, front month prices have remained within a $3.72/MMBtu and $4.03/MMBtu trading range since Mid-July 2014. Besides near-term changes in expectations of demand, we have seen technical trading around support, resistance and momentum take control of the market on multiple occasions. Within the above mentioned trading range, $3.80/MMBtu has been a key support level, where prices have rebounded eight times since July. In February 2013, the front month contract reached an intraday high of $6.493/MMBtu. With that in mind, there has been hesitation on getting shorter ahead of the of the heating season.

Are We Going to Have Another Polar Vortex Distortion this Winter?

The short answer: no one really knows for sure

However, there seems to be a consensus within the meteorologist community leaning toward that there is a high likelihood that a similar weather pattern, compared to that of last year, will develop during the second half of the winter. Warmer than normal water temperatures off the Northern Pacific coast could favor a high pressure system that will sit above Alaska and allow Canadian air to dip into the eastern half of the country form Jan-2015 through Mar-2015. A moderate development of “El Niño” could also lead to a back loaded winter. This means that conditions would be favorable for below normal temperatures during the back end of the heating season. Even though, it is expected that the last three months of the winter will be colder than normal, it is expected that it will not be as cold as this year during the same period.

The Energy Information Administration (EIA) is projecting lower heating expenditures this winter October 1 – March 31), compared to last winter. The EIA’s analysis hinges on the latest forecast from the National Oceanic and Atmospheric Administration (NOAA), which is projecting warmer temperatures compared to those of last winter (see map below). NOAA is projecting U.S. heating degree days during the winter to be 12% lower compared to last winter. An exception will most likely be New England where gas basis futures are trading significantly higher than last year. This reflects concerns about potential regional pipeline constraints during the winter and high percent of natural gas-fired generators in the region’s generation mix. 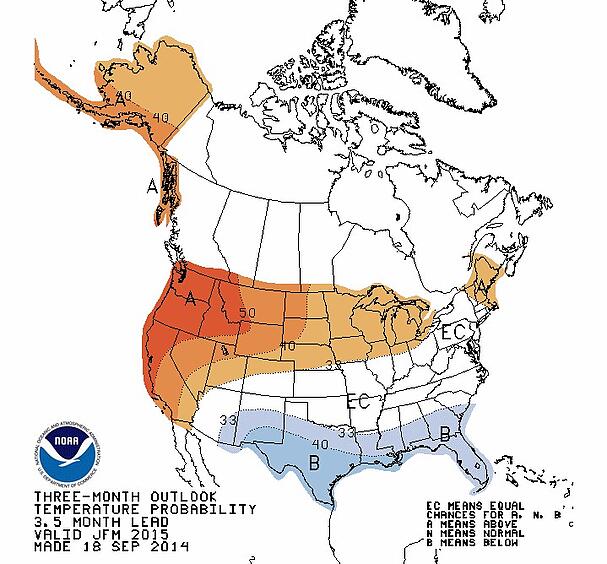 Weather forecasts present high uncertainty; however, this year there is agreement between a large number of models: the second half of the winter will be colder than normal across the eastern half of the U.S., but warmer than last year. Most models are in agreement with NOAA’s projection for the West, Texas and the Southeast regions; however, most models are disagreement with NOAA’s projections across all other regions. Therefore, at this time we believe there is a higher likelihood of a colder than normal second half of winter across the eastern half of the country, contrary to what NOAA projects. Regarding Texas, colder than normal and wet conditions early next year could affect wind generation. Therefore, high demand and less wind generation could affect reliability, similar to the event that took place on January 6, 2014.

Energy end users with open natural gas exposures should evaluate the risk/reward of hedging at current price levels. Even though, fundamentals and market sentiment have turned bearish, a shift in weather patterns can change sentiment in a heartbeat. Contact your Acclaim representative to discuss your current situation to make sure you have a sound risk management strategy ahead of the winter.