Massive contrast between colder than normal temperatures in Nov-2014 and above normal temperatures in Dec-2014 have caused very high price volatility in the Natural Gas futures market. Shifts in weather forecasts and record production have been the main price action drivers during the first half of the winter.

Natural gas withdrawals from inventories during the month of Nov-2014 totaled -161 Bcf, which represented the second largest net decline for that month in more than 10 years (source: Energy information Administration). The decline was mainly due to the natural gas pull of -162 Bcf for the week ending on 11/21/14, when commercial and residential consumption was 110Bcf higher than that of the previous week. Market sentiment was quite bullish then, as November’s weather conditions brought back Polar Vortex memories to the market. Nevertheless, market sentiment changed to bearish over Dec-2014 as supply concerns ahead of the peaking season eased. Mild weather has not only limited demand but also has allowed drillers to work without interruptions, enabling a swing in natural gas inventories from a deficit to a surplus compared to 2013’s level. The chart below shows how the year over year gap narrowed steeply in recent weeks.

Natural Gas Production in Dec-2014 was above 70.8 Bcf per day, which is 4.8 Bcf per day higher compared to the same period in 2013 (see chart below). Moreover, consumption has been 4.9 Bcf per day since early Nov-14 due to a lower number of heating degree days in 2014. The EIA is projecting that even though Jan-15 and Feb-15 it will be colder than normal and natural gas consumption will be lower than last year's historically cold winter. 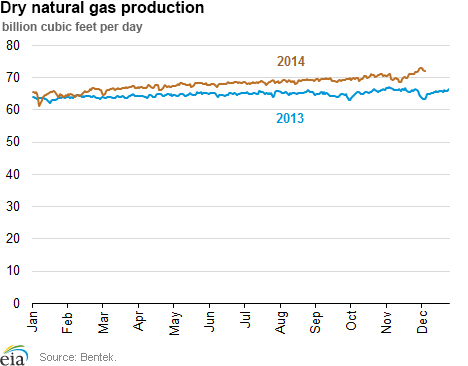 The EIA is forecasting that inventories at the end of the heating season (Mar-2015) will be 1,431 Bcf, which is significantly higher compared to the 11-year low of 857 Bcf in Mar-2014. Some analysts are suggesting that the number will be much higher. Weather conditions during the second half of the winter are unlikely to be as severe as those of last winter, so it is extremely unlikely that inventories will go down to such level. Additionally, natural gas production is expected to continue to be robust into 2015. Consequently, the inventory gap versus the 5-year average is expected to narrow further and perhaps reach such level by next month. December weather has changed the supply landscape and has accelerated the selling trend.

These conditions are expected to limit price spikes; however, end users with open natural gas positions should not get complacent since cooler than expected conditions could attract buyers. Natural gas prices will be very volatile during the holiday season due to weather shifts and low liquidity. From a technical perspective, natural gas is in oversold territory, which could lead to brief short covering rallies if forecasts change toward colder conditions. Another bearish technical indicator was that in mid- November price declines tested the 50 and the 100-day moving averages and rebounded at such level; however, in late November, the 100-day moving average was breached. Therefore, what was support became resistance as buyers turned to sellers.

If supply concerns continue to dissipate, a low price environment for calendar year 2015 is very likely.